So upon initial inspection RadNotification is pretty neat right…allows you to display a popup message somewhere on the screen whos content is set via webservice, callback, or markup… 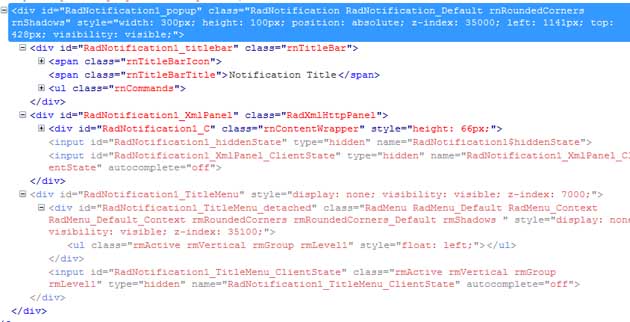 Notice the complete lack of tables…we’re just talking Divs, ULs, and Spans here people :)  This is a huge step forward when you compare it to the RadWindow which (while nice to use), is saddled with legacy bloaty tables (bleh).  How many times have you shown a RadWindow only to have the thing appear and the sides and top “POP” in when the images download…almost everytime is the answer, it even happens on the demos page.

So does this mean that telerik has finally come to their senses and have stopped supporting older IE browsers?  Doubtful at the moment, but perhaps future controls will be more forward thinking, and maybe sometime in the future the entire suite will get a re-work to be more like KendoUI or the MVC controls (jQuery, cleaner rendering)

So what would I change?