Most Sitefinity devs know that Sitefinity loads 2 copies of jQuery (by default).  One of those is the version Sitefinity itself uses, where the other version is the older copy included into the RadControls (which can be disabled).

So the myth though is that whenever you have a script error this HAS to be the problem.  You have a jquery conflict, and that needs to be resolved, telerik needs to fix it!..well that’s just wrong.

Illustrated by the following image, you can use BOTH the sitefinity jquery version and the RadControls one in tandem on the same site.  Why is that?  Well the radcontrols has theirs prefixed with $telerik.$ and in noconflict mode, which as mode…prevents conflicts. 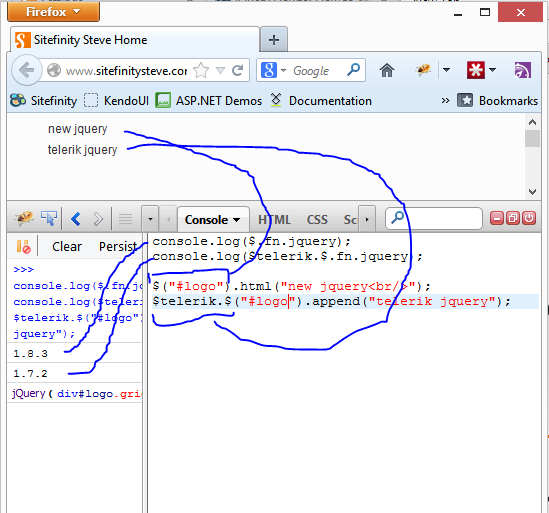 Your script error is likely some other reason…maybe you load jQuery via  a<script tag in your header with X version where there’s an embedded one coming down with a ResourcesLink…or any number of problems…but RadControls vs Sitefinity jQuery isn’t it ;)